I'm trying to set the 4.6 .NET framework for my project and in the settings, as it wasn't listed, I chose the last option - to install more frameworks. That directed me to a page where I selected VS2013, clicked on .NET 4.6 and downloaded the software but despite the installation being successful and restart of the computer, I still don't get to see the 4.6 .NET in the list of available options.

I've googled around for it and found mentioned that 4.6 is available on Win 8.1 (which is my system). However it doesn't say explicitly that it's available for VS 2013 (it doesn't say that it isn't, neither, though).

After having installed the TP (a.k.a. Targeting Pack), I still get nothing new in the options, as the image depicts. Suggestions? 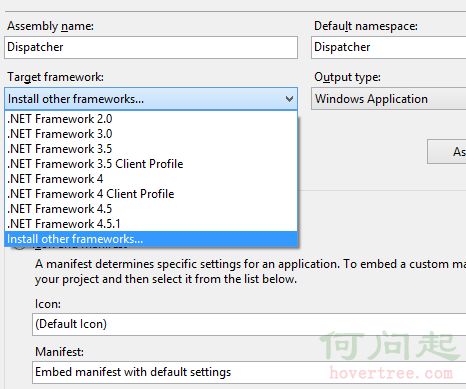 y putting together various pieces from the previous answers I was finally able to get a matching .Net Framework 4.6 and the Targeting Pack for it, and once both were installed the v4.6 Framework shows up as an available target framework Visual Studio 2012.

Then I downloaded and mounted the ISO for Visual Studio 2015 Professional ISO from https://www.visualstudio.com/downloads/download-visual-studio-vs, browsed to the netfx_46mtpack subdirectory, and installed netfx_46mtpack.msi.

You need to install the .NET Framework 4.6 Targeting Pack.